“We’ve been dominating and they had all ends of the state (at the competition),” JROTC Instructor Sgt. Maj. (Ret.) Gary Price said. “Sparkman (High School) from Huntsville won but it’s usually between Sparkman, Pell City (High School) and us—it just swaps around.”

The Wildcat Battalion came into the state championships off four consecutive first place wins at competitions in Greenville, Pell City and Sidney Lanier invitationals as well as first at the Fort Rucker NCO Cadet Challenge.

Price said the JROTC students easily spent 300 hours this year training for all the competitions that the battalion attends.

“You’re out there five to eight minutes for each little sequence so it’s a lot of hours put in for such a short amount of time, but that’s what it takes,” Price said. “Practice makes perfect.”

The Wildcat Battalion will head to its final competition of the season on April 6 in DeFuniak Springs, Fla., and then Price said it’s time for tryouts for the 2019-2020 year.

“Right after this competition, we’ll have a week—kind of—break and then we start tryouts for next year,” Price said. “We actually go over to both junior highs and do a recruiting trip and then we’ll have tryouts for two weeks. We normally have a big crowd coming to try out.”

Price said he’s proud of the how the cadets have performed this year.

The individual awards for the Alabama Drill Championships is as follows:

Thank you to The Southeast Sun for the article. 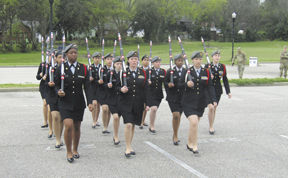