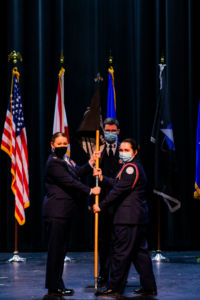 The Huntsville High School JROTC program is among the first in the country to convert their affiliation from the Air Force to the Space Force. On January 12, 2022 a transition ceremony commemorated the historic event.  Huntsville High is one of 10 units across the United States chosen to convert.  The event was officiated by Col Lindhorst, USSF Delta 13 Commander, and the Air Force was represented by Brigadier General Leslie Maher, the Holm Center Commander and Lieutenant Colonel (ret) David W. Murphy, Huntsville High School Senior Aerospace Science Instructor.

“The Space Force is incredibly important today to the way we live our day to day lives not just from the perspective of the military but as a society,” says Col. Niki Lindhorst. The JROTC Space Force program develops young talent and opens the door for college and career opportunities in science technology engineering and math as well as the military. “Investing time in our high schools, STEM education is incredibly important to us in Space Force and all we do is very technical and so we require a lot of minds and future leaders coming out of high schools and junior highs that are excited about STEM education,” says Col. Lindhorst.

Huntsville High school’s JROTC program is one of the select few to blaze the trail for the program’s future. “Across the nation there are hundreds of JROTC programs with the department of the air force so to be selected as one of the first ten, if you do the math its pretty special,” says Col. Lindhorst. About 1,200 JROTC cadets, or 1 percent of the entire AFJROTC program population, will be affected by this change. Space Force JROTC plans to convert up to 100 units over the next couple of years, according to Anthony “Todd” Taylor, Chief of the Program Development Division at headquarters Air Force ROTC. 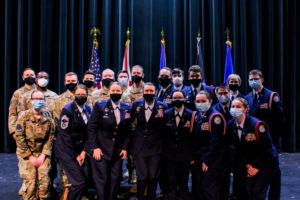